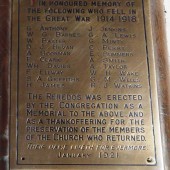 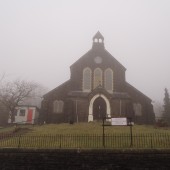 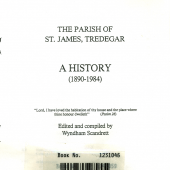 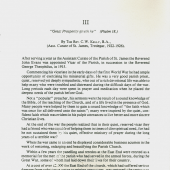 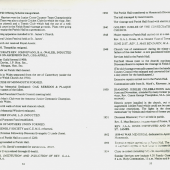 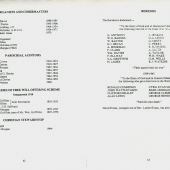 To the Glory of God and

in Honoured Memory of

the following who fell in

THE REREDOS WAS ERECTED

BY THE CONGREGATION AS A

MEMORIAL TO THE ABOVE, AND

AS A THANKOFFERING FOR THE

PRESERVATION OF THE MEMBERS

OF THE CHURCH WHO RETURNED

“THEIR NAME LIVETH FOR EVERMORE

“Their Names Live For Evermore”

Peace, peace! They are not dead, they do but sleep;
They have awakened from the dream of life. Tis we who, lost in stormy visions, keep.
With phantoms, an unprofitable strife.
They have out-soar’d the shadows of our night –
Envy and hate, and calumny and pain and that unrest which men miscall delight.
Can touch them not, nor torture them again.

In the spirit of faith and triumph which breathes in these lines, rather than with feelings of grief and despair, a magnificent reredos of oak panelling and a brass tablet were unveiled at St James’ Parish Church, Tredegar, on Sunday afternoon last in memory of the 20 members of the congregation who fell in the war, and of thanks for the preservation of those who had returned.

There was a crowded congregation, including a large contingent of the local Territorial’s under Major W P Abbott, and the dedication service was of a most impressive character. The brass tablet is fixed on the chancel wall and has the following inscription:-

“Their Names live for Evermore”

The prayers were read by the Rev. J Evans BA, vicar, and the lesson by Captain H Spencer Crawford. The hymns were “How Bright those Glorious Spirits Shine” and “For all the Saints who from their Labours Rest”, while the “Te Deum” was also beautifully sung.

The unveiling ceremony was performed by Mr F S Hall and Mr Lucas, the former expressing their great appreciation of the high honour conferred upon them. It was with the deepest feelings of homage and reverence that they performed this ceremony to the lasting and loving memory of their departed comrades and to the glory of Almighty God.

The Union Jack, with which the memorials were draped, was then drawn aside and the organist Mr G E Golding, played “The Dead March” (in “Saul”), the congregation standing during the whole of the impressive ceremony.

The dedication sermon was preached by the Rev. R W Roberts BD, rector of Bedwellty, on the words “And the Lord said unto Moses, write this for a memorial in a book” (Exodus xvii. 14). In the course of his sermon the rev, gentleman said that the Christian Church had a roll call of the mighty men, and on to it was inscribed the names of those who strove to carry out the will of God against overwhelming odds. There was a long list of saints, martyrs, bishops, apostles, priests, soldiers and mighty men. At such a service as that of the unveiling of a monument to the Glory of God first, and in the memory of the men of the parish who had laid down their lives in the great war, and as an expression of thanks to God by those who had been spared to return to their homes, were not their hearts brim-full of love and gratitude to God for His mercy? Was it not a thrilling thought and a great satisfaction to them that the members of the Church today were carrying on in the same spirit which actuated their forefathers in days and centuries long past? In perpetuating the memory of their fallen comrades they were doing nothing new, but they were fulfilling the best traditions of the church as delivered by God to Moses. Some thought that these memorial services should not be held, and that the war and all connected to it should be forgotten. But to him that appeared to be a pagan view. They should commemorate the heroes who died. They deserved the tributes of the people. Would it be right if they left to oblivion the brave lads and their deeds? They could extol their manhood and the pathetic bravery which they went away to their terrible task, and hard hearted would they be if they failed to keep their memory green. The tribute paid to the dead served as an inspiration to those who followed. Their individual and national character and their history would be the weaker and the poorer without the memory of the brave lads and their glorious deeds for their King and country. They were handing on to the generations unborn the great things which these lads had done, and was that too great a thing to do for them? Future generations would look back at that wonderful reredos and ask what it meant and loveliest of all, their names were recorded where the alter stood, and where the greatest sacrifice of all was commemorated. Christians believed in the Communion of the Saints, the idea of which was brotherhood and fellowship with God. They could carry out this into practical effect by doing their part in making their dear old country worthy for heroes to live in. they should follow on, and do their duty to their neighbours and to their God. There was a great deal of work to do to bring the country back to its pre-war condition – work for God, work for their fellow men, and work for the Church, for the Empire, and for the world at large. They wanted the spirit of brotherhood. They must pull together and get a Merry England once again. Everyone could take his share in this great work, and those who did their duty here could hope to be rewarded hereafter, not with the Victoria Cross, but with a crown of glory which fadeth not away. He appealed to the parents of those noble lads to live close to Christ, which would be the best tribute they could pay them.

The memorable service concluded with the singing of the hymn “All People that on Earth Do Dwell” and the National Anthem.