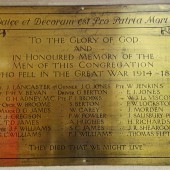 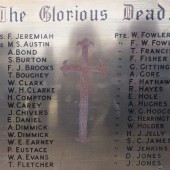 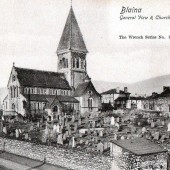 Saint Peter’s Church is a modern, utilitarian building devoid of many architectural features that are normally associated with Anglican churches. It was built around 1970 to replace a rather more grander structure, which was opened on 12th July 1857; this building became unsafe due to ground subsidence caused by underground coal workings and was demolished to make way for the current church building.

We expected only to find one war memorial within the church, which was dedicated to the memory of men of Saint Peter’s Church congregation who were killed in the First World War.

Upon our arrival at the church, with another memorial ‘turned up’. This had apparently been in storage for a number of years and had something of an unusual touring history.

The second memorial was dedicated to the memory of men of the locality who were killed in the First World War and contained a list of a larger number of names, many duplicated on the first memorial plaque. We understand that this second memorial had originally been displayed at the old Saint Peter’s Church but had been removed for safe keeping after the building was closed before its demolition. This second memorial had been kept and displayed at Ebenezer Chapel, Westside, Blaina until at least 2002 but its whereabouts were not known since the subsequent closure and conversion of Ebenezer to a residential dwelling.