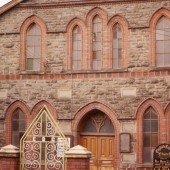 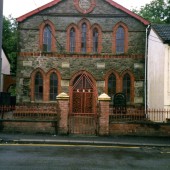 Upon the closure of the English Baptist Church in the late 20th century, its congregation ‘returned’ to its original ‘mother’ church at Siloh in Bridge Street, Tredegar.

As well as the congregation, 2 First World War memorials were also removed from the English Baptist Church on its closure and transferred to Siloh where they are now on display together with those dedicated to those who served and were killed in the First World War from Siloh’s own congregation.

Of the 2 memorials that originally belonged to the English Baptist Church:

One is a grey marble plaque containing the names of 8 men of the congregation who were killed in the First World War.

The second memorial is a hand written list on paper, framed and glazed, which contains a longer list of names of those men of the congregation who served and returned from the First World War.

This record applies to the marble plaque:

WHO FELL IN THE GREAT WAR

“THEY SHALLWALK WITH ME IN WHITE; FOR THEY ARE WORTHY.” REV.III.4.