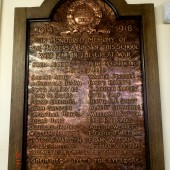 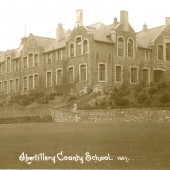 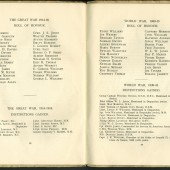 Bronze Plaque in a wooden frame with raised lettering. Originally displayed in Abertillery County Intermediate School but moved to Blaina Heritage Museum when school was demolished.

Plaque now housed in Blaina Heritage Museum. It was assumed by museum volunteers that the plaque originated from the former Blaina County School. However the names on the bronze plaque did not correspond with another roll of ‘staff and past scholars serving with the colours’, in the care of the museum, which is explicitly attributed to the Blaina County School.

An investigation into the names on the 1911 census suggested that the plaque most likely originated from a school in Abertillery.

Another piece of the jigsaw fell into place when the bronze plaque was compared with a wooden memorial to the teachers of Monmouthshire Intermediate Schools who were killed in the First World War; this memorial was in County Hall, Cwmbran for many years but has now been transferred to Usk, new HQ of Monmouthshire Council. The first 3 names on the bronze plaque, which are positioned above and separate from the other 2 columns hint at some hierarchy and indeed, 3 teachers are named on the Monmouthshire Intermediate Schools’ Memorial (now at Usk), which include the following 3 names: René P. M. Gardeur, Charles S. Reed and Owen Jenkins, all of Abertillery.

Finally, the jubilee souvenir for Abertillery County School published in 1946 was consulted and sure enough, the list of names in its roll of honour from the Great War corresponded with the names on the bronze plaque in Blaina Museum.