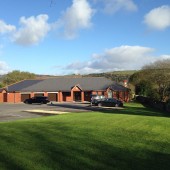 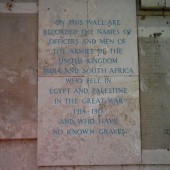 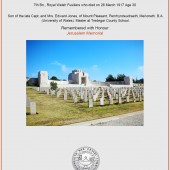 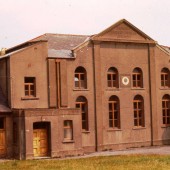 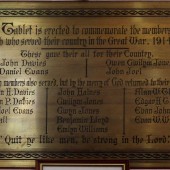 Penuel’s memorial consists of a brass plaque dedicated to those men of the congregation killed in the war and also those who served and returned. Amongst the names of those killed is that of Second-Lieutenant Owen Gwilym Jones of the Royal Welsh Fusiliers who was killed in action in Egypt on 26 March 1917 aged 30. He was born in Penrhyndeudraeth, Merionethshire and was a teacher at Tredegar County School. Owen has no known grave but his name is inscribed on one of the panels at the Jerusalem Memorial.

Interestingly, Owen is also commemorated on at least 4 other memorials. He was an assistant teacher at Ystalyfera before his appointment at Tredegar and he is commemorated on the Ystalyfera County School War Memorial. He is also commemorated on a school memorial, now housed at Tredegar Comprehensive School. He is listed on a memorial, now at Usk, at the new offices of Monmouthshire County Council, which is dedicated to teachers of the County Intermediate Schools of Monmouthshire who died in the First World War. Owen’s name is also listed on Tredegar’s town cenotaph. Thus far, Owen’s name has been recorded on 6 memorials that have been identified to date.

On a more personal note, the following extract from the Labour Voice newspaper of 7 April 1917 reports Owen’s death:

Old Ystalyfera County School pupils and friends at Ystalyfera will learn with deep regret, of the death in action of Lieut. O. G. Jones (popularly known in the district as “O.G.”), whilst serving in Egypt. Lieut. Jones was well known in the locality, and during his stay here made a large circle of friends through his genial and cheerful disposition. Previous to his enlistment he occupied the post of science master at the County School; he also took a prominent part in local sports, and played for the Ystalyfera Cricket XI and the Hockey Team.