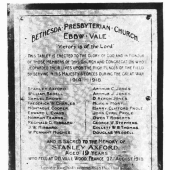 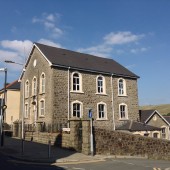 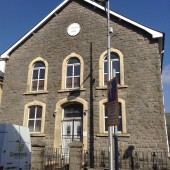 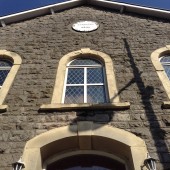 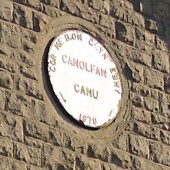 A First World War memorial plaque from Bethesda Presbyterian Church, Ebbw Vale. The building has been Ebbw Vale Male Voice Choir’s practice hall since the mid-1960s and it appears that the plaque was removed from the building to nearby Penuel Calvinistic Methodist Church (Westlake, Ray 2002).

Penuel is no longer in use as a place of worship and it is now used as a scout hall. Hopefully we may be able to verify the existence of the memorial plaque once a visit there can be arranged.

In the history of Bethesda Church, published during its centenary year, there is a reproduction of the roll of honour of those men and women from its congregation who served and died in the First World War on page 31.

OF THOSE MEMBERS OF THIS CHURCH AND CONGREGATION WHO /

JEOPARDED THEIR LIVES UPON THE HIGH PLACES OF THE FIELD /

BY SERVING IN HIS MAJESTY’S FORCES DURING THE GREAT WAR /

[NAMES IN 2 COLUMNS, ORDERED BY SURNAME]

AND IS SACRED TO THE MEMORY OF /

“Greater love hath no man than this, that a man /

lay down his life for his friends” /