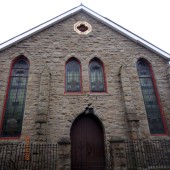 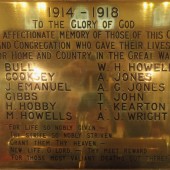 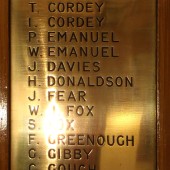 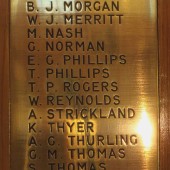 The Chapel was built in 1875 and was designed by architect Thomas Thomas of Landore. A Sunday School added in 1910.

The ’cause’ began much earlier in 1854 and its membership grew rapidly. As a result, a second chapel was built in 1875 at its current location. Much of the increase in membership was owing to immigration as a result of rapid industrialisation of the Abertillery area in the late 19th Century.

Many of these migrants came from outside Wales and were English speaking only – a factor which appears to have caused a rift in its membership over the language used in services. In 1896 about 40 ‘Welsh friends’ left Tabernacle church to establish a separate ‘Welsh’ Congregational Chapel.

Tabernacle’s congregation increased dramatically after the 1905 religious revival and the chapel complex was expanded with a Sunday School added in 1910.

An account of the chapel’s history during this period states that: ‘On Saturday, January 27th, 1923, a magnificent Memorial Organ was opened and dedicated “to the Glory of God and in affectionate memory of those of this Church and Congregation who gave their lives for home and country in the Great War.” It was opened by Mrs. B. Francis, supported by Mr R. Hall. In the evening an organ recital was given by H. Ravenscroft Richards and on Sunday and Monday special preaching services were held. Memorial tablets bear the names of the twelve men who gave their lives and the fifty-three others who served and were privileged to return.’

Inscription: 1914 – 1918/ TO THE GLORY OF GOD/ AND IN AFFECTIONATE MEMORY OF THOSE OF THIS CHURCH/ AND CONGREGATION WHO GAVE THEIR LIVES/ FOR HOME AND COUNTRY IN THE GREAT WAR/ [NAMES]/ “FOR LIFE SO NOBLY GIVEN, -/ THY STRIFE SO NOBLY STRIVEN,/ GRANT THEM THY HEAVEN, -/ NEW LIFE, O LORD, – THY MEET REWARD/ FOR THOSE MOST VALIANT DEATHS OUT THERE!”/

The economic depression that occurred after the First World War had a devastating effect upon Abertillery’s collieries and this in turn impacted upon Tabernacle’s congregation. An account of the chapel’s history during this period states that: ‘Depression, unemployment, poverty occasioned an incessant drain on the young life of the Fellowship as men and women were driven farther afield in search of a livelihood. What awful frustration must have been theirs – frustration shared by teachers and pastors as they saw their finest and most useful folk taking their journey into far countries’.