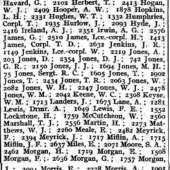 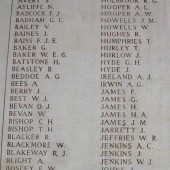 Section of one of the panels of the Menin Gate Memorial in Ypres commemorating men from the 3rd Mons whose graves are not known. Thomas Boughey bottom left.
Alan James 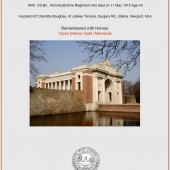 Thomas Boughey was born in Shrewsbury in 1872, the son of a cooper from Cheshire. By 1901 he was working as a labourer underground at Blaina. Later that year, Thomas married Charlotte Kerton, 11 years his junior, who lived and worked as a barmaid at the Black Lion Inn at Brynmawr. By 1911, Thomas and Charlotte lived at No.1 Sun Pit Cottage in Blaina along with 3 daughters, May, Hilda and Nelly and son, Thomas Clifford. Another son, John was born in 1912.

When the First World War broke out Thomas volunteered for service and joined the 3rd Battalion of the Monmouthshire Regiment. He arrived in France on 13 February 1915 and would have served with the battalion during the 2nd Battle of Ypres. Although the Commonwealth War Graves Commission has the date of Thomas’ death as 11 May 1915, other sources indicate that he could have been killed on any day between 2 and 11 May such was the scale of losses and circumstances of the retreat towards Ypres during those dreadful weeks during early May 1915. On the 3rd Mons casualties list – Abergavenny Chronicle, 18 June 1915, – Thomas Boughey highlighted in yellow near top of list of missing men.

Commonwealth War Graves Commission’s records indicate that by the early 1920s his widow Charlotte had moved to Jubilee Terrace, Surgery Road in Blaina.