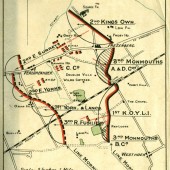 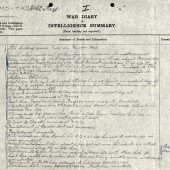 In part one, we left the 3rd Battalion of the Monmouthshire Regiment (composed mainly of men from Blaenau Gwent) on 4th May 1915 in a precarious position, on a new defensive line, facing a numerically superior enemy and badly outmatched by opposing artillery.

On 5th May, the ‘front line trenches of whole brigade [were] very violently bombarded; 6th May: ‘Bombardment of trenches but not severely’; 7th May: ‘Bombardment resumed’. By now the battalion had been in the line without relief since 17th April; its numbers were greatly reduced and supporting artillery ‘were few in number’ and, ‘woefully short of ammunition’.

The regimental history for the 3rd Mons recounts the next stage of the battle, starting with the ominous words, ‘So dawned the most critical day of the great battle, the 8th of May’. The regimental diary states, ‘Violent bombardment from about 4am – 9am and was followed by an [infantry] attack by the enemy along the whole line.’ By now, ‘the front line was practically obliterated, and there were few survivors to hold up the attack. About 10am, the 3rd Mons were ordered to evacuate the front line trenches but in so doing they were exposed to intense machine gun fire and shelling ‘which practically swept away the few survivors’. The order to retreat didn’t reach all men and a small group commanded by Lieutenant Reed resisted to the last. It was said that advancing Germans bayoneted injured men unable to withdraw from forward positions.

A note in the regimental diary reads, ‘Battalion lost heavily under shell, machine & rifle fire’. Indeed it was a dreadful loss. The statistics are eye-watering. Of the 4 companies of men in the battalion, ‘A’ company could muster ‘only 13 survivors’ and no officers; ‘D’ company – ‘only 16 men answered the roll call next morning’; ‘B’ and ‘C’ companies ‘had 3 officers and barely 100 men’. At full strength, a battalion would consist of 1,007 men of whom 30 were officers.

The 8th of May 1915 is probably foremost among all the tragic and terrible events that took place in the First World War that warrant remembrance in Blaenau Gwent.