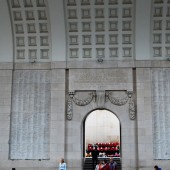 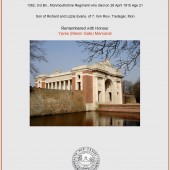 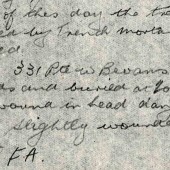 Ishmael Evans (portrait attached) was just 21 years old; he was the son of Richard and Elizabeth Evans of No.7 Iron Row, Tredegar. [You may recall in an earlier post that William Bevan of No.4 Iron Row was killed only 2 days previously] In 1911 Ishmael worked below ground as a collier’s labourer, possibly assisting his elder brother, John Henry, who cut the coal (hewer).

Ishmael was a member of the 3rd Battalion of the Monmouthshire Regiment. The regimental diary for 26 April records him as one of 5 casualties of ‘D’ company who were killed or wounded when their section of trench was bombarded by trench mortars late that day. Ishmael suffered a ‘dangerous’ head wound and was sent to a field hospital but tragically, he died 2 days later on 28 April 1915.

In the aftermath of intense fighting and shell bombardment that followed, the precise location of Ishmael’s place of burial became lost and he has no known grave. Like many young men of the 3rd Monmouthshire Battalion who were killed during the Second Battle of Ypres in Belgium, their place of burial remains unknown. Their names are listed on the Menin Gate memorial, which bears the names of more than FIFTY-FOUR THOUSAND men whose graves are not known, drawn from the forces of Australia, Canada, India, South Africa and United Kingdom who died near Ypres during the First World War.

The site of the Menin Gate was chosen because of the hundreds of thousands of men who passed through it on their way to the battlefields nearby. The Menin Gate is one of four memorials to the missing in Belgian Flanders which cover the area known as the Ypres Salient. Each night at 8 pm the traffic is stopped at the Menin Gate while members of the local Fire Brigade sound the Last Post in the roadway under the Memorial’s arches.