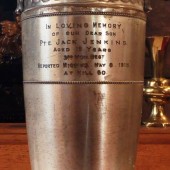 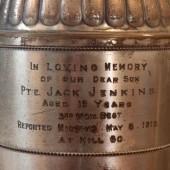 Memorial vase made of tinned metal dedicated to the memory of Private Jack Jenkins, who was killed at the 2nd battle of Ypres, May 1915. Jack was only 19 years when killed. He was a member of the 3rd Battalion of the Monmouthshire Regiment and he was reported missing, probably killed, on 8 May 1915 during the 2nd Battle of Ypres in Belgium when the battalion in which Jack served was practically wiped out as an effective fighting force.

The location given for Jack’s death on the vase dedicated to his memory by his parents was ‘Hill 60’ which, was the name given to a low bluff, hardly a hill, 60 metres above sea level but which commanded a clear and uninterrupted view across the surrounding, flat countryside. Hill 60 was occupied by Germans whose machine guns and artillery kept any British advance at bay. The British strategy was to drive tunnels underneath Hill 60 and detonate a huge quantity of explosives, wiping out the German defenders above. This was partly successful but the initial advance was not fully exploited and the Germans counteracted vigorously. Jack’s body was never found; we would like to find out if he was involved in the underground war – many Welsh miners were utilised for this work, for obvious reasons.

OF OUR DEAR SON/

One of 3 private memorials at Saint Mary’s (Anglican) Church in Brynmawr that are dedicated to individuals who were killed in WW1.