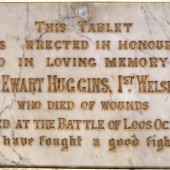 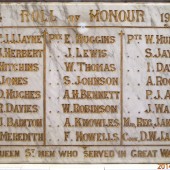 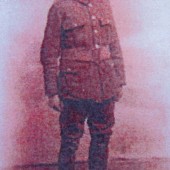 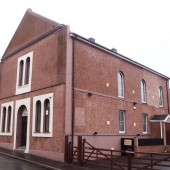 Originally kept at the (former) Congregational Chapel in Queen Street, Brynmawr, which has since been converted into a private dwelling.

One of two memorials dedicated to men of the Queen Street congregation who served in the First World War. This memorial plaque is dedicated to an individual, Private Ewart Huggins, who died of wounds on 2 October 1915 during the Battle of Loos.

Ewart Huggins was a collier who worked for Lancasters in Blaina and lived at 5 Dumfries Place, Brynmawr. From his military record, he enlisted for the territorials before the war in 1908, aged 19 years and 9 months; at this time, he was 5 foot 3 inches in height, weighed just over 7 stone and his ‘fully expanded’ chest measured 34.5 inches.