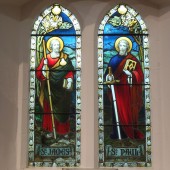 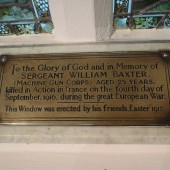 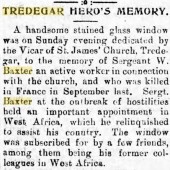 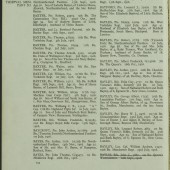 To the Glory of God and in Memory of
SERGEANT WILLIAM BAXTER ,
(MACHINE GUN CORPS) AGED 25 YEARS,
killed in Action in France on the fourth day of
September, 1916, during the great European War.
This Window was erected by his friends, Easter 1917.

Dedication of a Memorial Window

A handsome stained glass window was dedicated at St James’ Church, Tredegar, on Sunday evening to the memory of Sergeant William Baxter, who was killed in action in France in September last, who was an active worker in connection with St James’ Church. The dedication was performed by the vicar (Rev. John Evans, B A); the unveiling of the window was witnessed by a large congregation.
During the course of the sermon the Vicar said he was pleased to accept the gift on behalf of the church because in the first place it was a work of art, which beautified the sanctuary, showing the figures of St James, the patron saint of that church and St Paul the great apostle of the Gentiles. They could well do with many more ornaments for the House of God which would add to the solemnity and help to make it more worthy of the sacred pressure which He vouchsafed to them in a special way. In the second place it would remind them of the noble example of him whose memory it perpetuated. He was a loving son, a steadfast friend, a consistent Christian who had special association with that church from his infancy; a constant worshipper and an active worker there for many years. In the third place, it was a perpetual symbol or memorial of the greatest sacrifice possible – the sacrifice of self. “Greater love hath no man than this, that a man lay down his life for his friends”. That memorial would always remind them of one of their own members who had made that sacrifice, unfortunately they had news ago of another of their fellow worshippers who had made the great sacrifice. He hoped that when peace was declared they, as a church, would commemorate the gallantry of their fallen heroes in some tangible way, by some fitting memorial which would continually remind them of the self sacrifice of these brave men on their behalf. The lesson of self sacrifice was one which they at home needed very much to learn. Their country in its hour of peril, had called and there had been a ready response, but they could not feel satisfied that sufficient response was made when God called for their services. What sacrifice had they made for God? It was quite true that there was not necessarily any contradiction between sacrifice for country and sacrifice for God. Sacrifice for country – let them believe it with all their hearts – was sacrifice for God; but God called for them in a much wider region, in as much as His Kingdom was more extensive than any kingdom in this world. God called upon them in connection with the extension of His own Kingdom.
Appropriate hymns were sung. Mr G E Golding presided at the organ, the whole service being of a very impressive character.
The window which was much admired for its beautiful colours and artistic designs, was erected by Mr G E Petit and Mr E Fowler and was subscribed for by personal friends of the gallant Sergeant, among them being several colleagues in West Africa, where he held an important appointment, which, when war broke out, he relinquished to fight for his country.
Underneath the window is a brass tablet, with the inscription: “To the Glory of God and to the memory of Sergt, William Baxter, Machine-Gun Corps, aged 25, killed in action in France on the 4th September 1916, during the great European War. This window was erected by his friends, Easter, 1917”
The members of the committee were Messrs R Jenkins, R Griffiths, W Griffiths, J Gough, Victor Davies and Ivor Alsop.