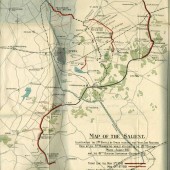 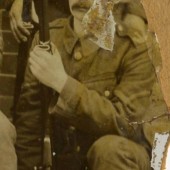 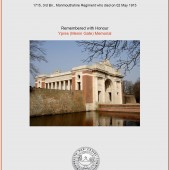 Commonwealth War Graves Commission's dedication to James Thomas Mifflin, 3rd Battalion, Monmouthshire Regiment who was killed on 2 May 1915 at Ypres 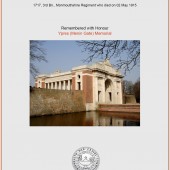 Commonwealth War Graves Commission's dedication to Albert Mifflin, 3rd Battalion, Monmouthshire Regiment who was killed on 2 May 1915 at Ypres

Commonwealth War Graves Commission's dedication to Herbert Martin, 3rd Battalion, Monmouthshire Regiment who was killed on 2 May 1915 at Ypres 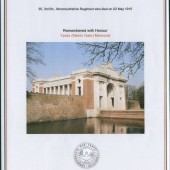 The regimental diary for the 3rd Mons records that by the end of April 1915: ‘The general situation was worse than we knew. The gas attack had broken the line in the north of the [Ypres] Salient and enabled the Germans to bring their guns up on the Pilckem Ridge and adjoining high ground …’ The German guns had an uninterrupted view across British positions and so, with heavy losses, a tactical withdrawal had to be made to a new defensive line of trenches by 3 May 1915.

We remember two brothers, Albert Mifflin aged 19 years and James Thomas Mifflin aged 22 years, who were both killed on the same day, 2 May 1915. Both brothers volunteered for military service at Abertillery at the same time and were members of the 3rd Monmouthshire Battalion. They were originally from Suckley in Worcestershire.

In 1906, Herbert Martin, a baker’s assistant of Bedminster, Bristol married Beatrice Tripp, who 5 years earlier lived at Bristol Workhouse together with her 4 brothers and 1 sister. Soon after the young couple moved to South Wales where Herbert had replaced the flour of the bakery floor for the black coal dust of a colliery where he worked as a hewer underground. Children followed: Flossie (1907), Moses (1908), Herbert (1909), Annie (1912) and Sidney (1914). In 1911, the family lived at 93 Arrail Street, Six Bells, Abertillery; a 6 bedroomed house which they shared with 2 adult boarders, both colliers, originally from Cheltenham. Herbert volunteered for military service and arrived in France on 13 February 1915 with the 3rd Monmouthshire Regiment. Sadly he was killed near Ypres on 2 May 1915, only 28 years old. Herbert has no known grave and is remembered on the Menin Gate.

There was no respite however, as the German army pressed on with its attacks towards the town of Ypres. The evening of the next day, ‘of May 4th saw the beginning of the Battalion’s hardest trial ….[which] was all over within a week, but during that period the 3rd Monmouths were involved in some of the hardest fighting of the war, suffered heavy casualties, and though outnumbered by the enemy and without adequate artillery support, held up the German attack at a crucial point of the line.’