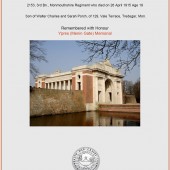 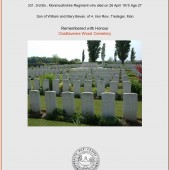 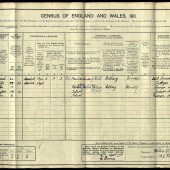 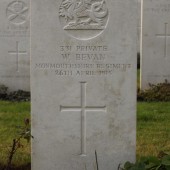 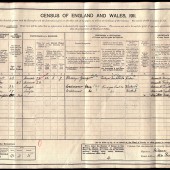 William Bevan was 27 years old and was the son of William and Mary Bevan of No.4 Iron Row, Tredegar. According to the 1911 census, he lived with his parents and was one of 5 surviving children. In 1911, he worked underground as a coal hewer (collier) – a back-breaking and dangerous job. He volunteered for war service at Sirhowy.

Walter Charles Porch was 19 years old and was the son of Walter Charles and Sarah Porch of 129 Vale Terrace, Tredegar. In 1911 he lived with his parents and was the eldest of 3 children; despite being just 14 years old, he worked underground as a coal hewer too.

Both men were members of the 3rd Battalion of the Monmouthshire Regiment. Casualties of this regiment, which drew volunteers mainly from the Blaenau Gwent area, were to mount rapidly over the coming weeks as the German army pressed to capture Ypres, a town in West Belgium, from the allies.

A series of battles, fought between 22 April and 25 May 1915, came to be known as the Second Battle of Ypres. It was during this time that poison gas was used in a mass attack for the first time on the Western Front.