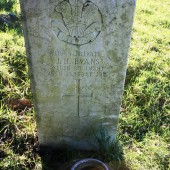 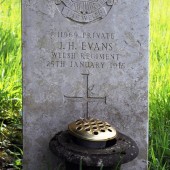 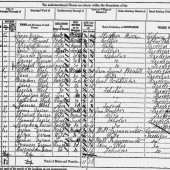 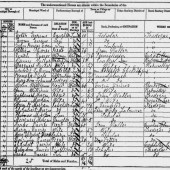 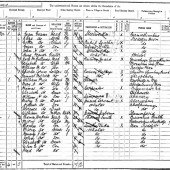 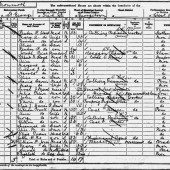 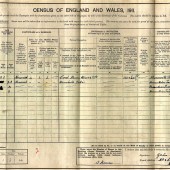 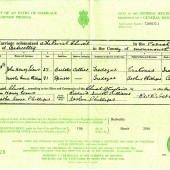 Lance Corporal (11969) John Henry Evans, 8th Battlion Welsh Regiment died of wounds at Tidworth Hospital on Monday 25 January 1915. He is buried at Cefn Golau, Cemetery, Tredegar – grave ref: N. 28. 53. Hid grave lies in one of the older parts of the cemetery which has been cleared of surrounding graves.

He was born c.1879 and was the youngest child of Evan and Eliza Evans and had at least 5 siblings.

He married Martha Annie Phillips on 18 March 1907 at Bedwellty Parish Church. John’s given age was 27 years and his occupation was a collier; Martha was 19 years of age. On the census of 1911, they lived at Plummers Row, Sirhowy, Tredegar and had two daughters, Violet (4) and Irene (2). By the time of John Henry’s death in 1915, there were four children, the eldest being 8 years old.

Two military funerals took place at Tredegar last week-end. The first which took place on Saturday was that of Lance Corporal J H Evans of Plummers Row, Sirhowy, Tredegar, who was attached to the 8th Welsh Regiment of Kitchener’s Army. He died at Tidworth Hospital on the previous Monday and his body was brought to Tredegar for interment. The deceased who was formerly in the Sirhowy Volunteer Corps, leaves a widow and four small children, the eldest being only eight years old. His family is well-known locally. He was the brother of Mrs T Jenkins, Ashville and Mrs Tagg, Fields Road. The deceased was interred with full military honours, the Tredegar Town Band under Mr Eli Shaw played the “Dead March” from Saul en route from the house to Cefn Golau Cemetery, there was a large contingent of soldiers and Territorials home on furlough in the procession. A firing squad from the Welsh Regiment, Cardiff under Sergeant Jeffries, fired volleys over the grave of their departed comrade and Bugler Nash sounded the “Last Post”. The Reverends F Surman and E Carter Pickles officiated.