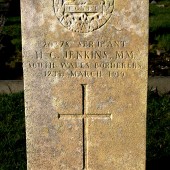 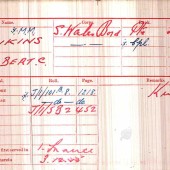 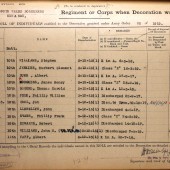 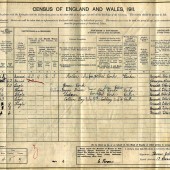 Herbert Clement Jenkins was born in 1893, the son of Thomas John and Mary Ann Jenkins. He was one of 11 children of whom 8 were still alive in 1911. At this time (1911), Herbert worked as a stationary engine driver. it appears that he enlisted in the army as a volunteer in the 10th (Gwent) South Wales Borderers. He arrived in France on 3 December 1915. Whilst he enlisted as a private in the ranks, he was promoted to corporal and at the time of his death he was acting Sergeant although this does appear to be uncertainty as to whether he was promoted to the rank of sergeant. Herbert’s medal card contains a glaring error insofar that it states he was killed in action on 17 August 1917; this is patently incorrect. Herbert also gained a ‘Military Medal’ for an act of valour or bravery. At this point, it is not known when or where this act took place. Herbert died at home in Ebbw Vale on 12 March 1919; the cause of his death is not yet known. He is buried at Ebbw Vale Cemetery; Grave ref: K, North border. 4. 3.