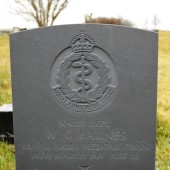 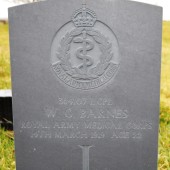 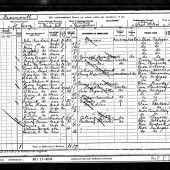 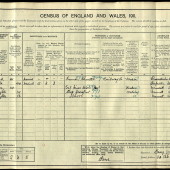 Member of 1/1st Welsh Field Ambulance in the Royal Army Medical Corps. The Field Ambulance was a mobile front line medical unit, which was divided into 3 Sections. In turn, those Sections had Stretcher Bearer and Tented subsections. Each unit comprised of 10 officers and 224 men. Most came under command of a Division, and had special responsibility for the care of casualties of one of the Brigades in the Division. Each Division had three Field Ambulances. The theoretical capacity of the Field Ambulance was 150 casualties, but in battle many would simply be overwhelmed by numbers. The Ambulance was responsible for establishing and operating a number of points along the casualty evacuation chain, from the Bearer Relay Posts which were up to 600 yards behind the Regimental Aid Posts, through the Advanced Dressing Station to the Main Dressing Station. It also provided a Walking Wounded Collecting Station, as well as various rest areas and local sick rooms. The Ambulances would usually establish 1 Advanced Dressing Station per Brigade, and 1 Main Dressing Station for the Division.

William George Barnes was born on 19 April 1896 at Tredegar to parents, Henry and Emma Barnes.

According to 1901 and 1911 census, William George lived at 3 Vale Terrace, Tredegar.

in 1911, he worked as a coal miner and was 14 years old; he had two sisters, twins Florence May and Gertrude Annie, both aged 12.

“Their Names live for Evermore”