You are here: Home>Categories>Women & female roles>Munitions manufacture at Ebbw Vale during the First World War

Munitions manufacture at Ebbw Vale during the First World War 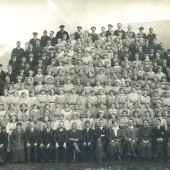 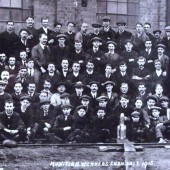 Munitions manufacture at Ebbw Vale during the First World War

In a matter of only a few months after the start of the First World War, there was an acute shortage in the supply of munitions needed by British and Commonwealth forces, as the conflict expanded in both its range and intensity. As a means of increasing the supply of ammunition shells to meet this growing demand, a number of ‘National Shell Factories’ were established across the UK. At Ebbw Vale, one such ‘National Shell Factory’ was opened in June 1915 by the Ebbw Vale Steel, Iron and Coal Company who placed a new fitting shop at the disposal of the Ministry. In this building, the manufacture of 18-pounder and 60-pounder shell casings was carried on, mainly by female labour. The machines were capable of turning out 5,000 shells per week. However by the time the plant was in full operation, the Ministry decided that there was no further call on these type of shells so their manufacture was suspended. The ‘National Shell Factory’ closed in July 1916 but this was far from the end of shell manufacture at Ebbw Vale,

The Ebbw Vale Company then proceeded with the manufacture of 8-inch shells at the works. According to the company’s history, “These were satisfactorily turned out almost entirely by female labour”, perhaps not without a hint of surprise, typical of its era! A military detachment  was introduced into the works to protect vulnerable points; indeed the Iron and Steel departments of the company were taken under Government control from November 1915 until November 1919.

In connection with the munition works, the Y.M.C.A. erected a ‘wooden hut’ as a canteen at the Ebbw Vale works. This was staffed by a number of voluntary ‘lady’ helpers including the daughter of Frederick Mills, the company manager, and a Mrs Williams of Miskin Manor. No doubt as a consequence of the involvement of high status backers, the Ebbw Vale Company recognised the value of a works canteen on site to its workers and took over the running of the canteen, replacing the original wooden building with a permanent structure. The cooking apparatus was powered by electricity, still novel at this time, and the company history boasted that on 23 September 1920, the canteen served lunch to 457 guests visiting the works!