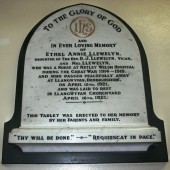 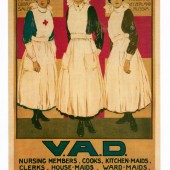 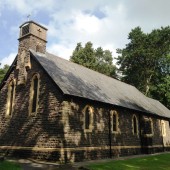 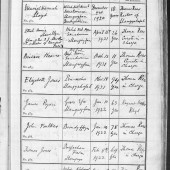 Burial register for Llangwyfon Church, Denbighshire - Ethel Annie Llewelyn is the second person on the page

It’s unusual to find any memorials commemorating the contribution made by women during the First World War in Blaenau Gwent so it was a pleasant surprise to find a marble tablet at Saint David’s Church in Beaufort dedicated to a young woman called Ethel Annie Llewelyn, of the Voluntary Aid (Glamorgan) Detachment during the ‘Great War’ of 1914-18.

Ethel was the daughter of the rector of Saint David’s Church, David Jones Llewellyn, who was vicar of Beaufort between 1889 and 1923. Ethel was born on 2 June 1895 and at the tender age of just 3 years, she started school at Rassau National School on 30 June 1898. In February 1903, she moved to Malvern to continue her education. By 1911, she was a boarder at Saint Stephen’s College in Windsor, which was run by an Anglican religious order of nuns.

Ethel worked as a nurse between 1914 and 1918 at Netley Welsh Hospital. Raised in 1914 from volunteers, the Welsh Hospital comprised of about 100 staff and having been organised in Cardiff, moved to the military hospital at Netley near Southampton. Here, on the recreation ground to the north of the main hospital, a timber-framed building was constructed, which housed 100 beds.

Sadly, it appears that Ethel contracted TB (tuberculosis) and died on 13 April 1921 at the Welsh National Memorial Sanatorium at Llangwyfan in Denbighshire. She was buried at Llangwyfan Church but a marble plaque was placed to her memory at Saint David’s Church in Beaufort.

TO THE GLORY OF GOD/ AND/ IN EVER LOVING MEMORY/ OF/ ETHEL ANNIE LLEWELYN,/ DAUGHTER OF THE REV. D.J.LLEWELYN, VICAR,/ AND MRS. LLEWELYN,/ WHO WAS A NURSE AT NETLEY WELSH HOSPITAL/ DURING THE GREAT WAR 1914-1918./ AND WHO PASSED PEACEFULLY AWAY/ AT LLANGWYFAN, DENBIGHSHIRE,/ ON APRIL 13TH, 1921,/ AND WAS LAID TO REST/ IN LLANGWYFAN CHURCHYARD/ APRIL 16TH, 1921./ THIS TABLET WAS ERECTED TO HER MEMORY/ BY HER PARENTS AND FAMILY./ “THY WILL BE DONE.” “REQUIESCAT IN PACE.”/