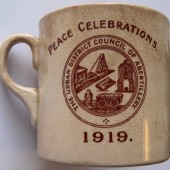 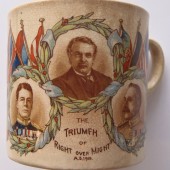 A commemorative mug produced by Abertillery Urban District Council to mark the signing of the peace treaty at Versailles on 28 June 1919 following the end of the First World War. Such ‘peace souvenirs’ were produced in their millions. I’m sure that many families will have had at least one in their possession.

The armistice (end of fighting) took place on 11 November 1918 and this earlier date is generally accepted as signifying the end of the war. Occasionally you will find war memorials that signify that the First World War spanned the years 1914-1919. This was because some held the view that the war didn’t officially end until the signing of the peace in 1919 with Germany.

In all, there were 5 separate peace treaties that applied to Germany and its allies although the Treaty of Versailles, which set out the terms of peace with Germany, is the treaty that is most widely known.

Later treaties applied to the other, defeated ‘Central Powers’ following the armistices of 1918. Major decisions included the creation of the ‘League of Nations’ and transfer of German and Turkish territories under mainly British and French control. National boundaries were re-drawn across Europe.

The Treaty of Versailles signed on 28 June 1919 laid the blame for the war squarely on ‘the aggression of Germany and her allies.’ The terms of the peace were humiliating for Germany; the high reparations (compensation) that it was required to pay were crippling for its war-torn economy. The economic and political instability of the 1920s and 1930s laid the seeds for the Second World War, which began only 20 years after the signing of the peace at Versailles.