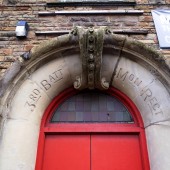 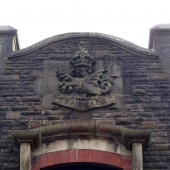 Links with past wars are apparent throughout the area as we’ve discovered in our fieldwork so far. On Cwm Cottage Road in Abertillery, the Drill Hall building, built before the First World War, bears links with an earlier conflict – that of the South African War of 1899-1902 also known asthe Second Boer War.

The Drill Hall was used by the 3rd Battalion of the Monmouthshire Regiment and their emblem, high above the original main entrance to the building, bears similarities and differences with that now outside Cwm Library, south of Ebbw Vale.