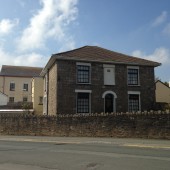 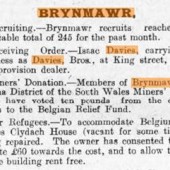 Brynmawr and war refugees, 100 years ago.

100 years ago, communities across the UK became enthusiastic hosts to civilian refugees fleeing Belgium as a result of the German army’s advance into the country during the First World War. An estimated 250,000 refugees came to Britain from Belgium from August 1914 onwards, including around 16,000 who arrived in a single day at the port of Folkestone in Kent on 14th October 1914.
Most Belgian refugees were housed with families across the British isles and were enthusiastically welcomed on their arrival. Official attitudes were positive towards the refugees and it is suggested that the British Government may have exploited their plight to encourage anti-German sentiment and boost public support for the war – Belgian refugees were a tangible reminder of why the war was worth fighting.
On 12th November 1914, the Brecon & Radnor Express reported that Clydach House, situated on the corner of where Davies and Bailey Streets meet in Brynmawr, which had been vacant for some time, was to be used to house Belgian refugees. It was also reported that the local miners’ federation had pledged £10 towards the local relief fund established for Belgian refugees.
Within a year of the end of the war, it’s estimated that 90% of Belgian refugees had returned home and there are few traces of their temporary stay here. If anyone has information about Belgian refugees in Blaenau Gwent, please forward it to us.