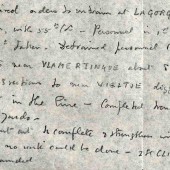 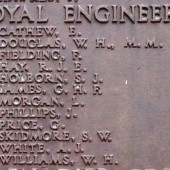 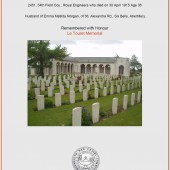 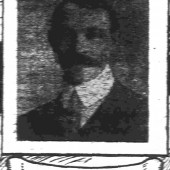 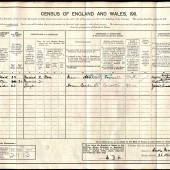 In 1911 Lewis Morgan worked as a stone mason for Abertillery Council but appears to have joined the army shortly after war was declared. He arrived in France in October 1914 with the 54th Field Company of the Royal Engineers. In the period before he was killed, Sapper Lewis Morgan’s company were involved in repairing roads, digging drainage ditches, repairing trenches, excavating dug-outs and strengthening defences including fixing barbed wire in front of trenches to deter and resist enemy infantry attack.

On 30 April 1915, the regimental diary records that: ‘2 sections went out to complete and strengthen wire – carrying party asked for, was not provided, so no work could be done – 2 Lt. Clifford wounded – Spr Morgan killed & one spr wounded.’

In those 3 words, ‘Sapper Morgan killed’, not only was the life of one young man ended prematurely but that event had a profound and immediate impact upon the lives of his wife and his 3 young children as well as his extended family. All, in different ways, were victims of the First World War.