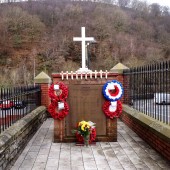 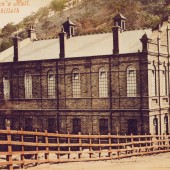 The War Memorial in the grounds of the Llanhilleth Miners’ Institute was constructed in 1989 under the supervision of Pam Hopkins who was the main fund raiser for the project. W.E. (Bill) Smith, chairman of the Institute for many years and a miner at Llanhilleth (No.2) Colliery until its closure in 1969, had been a South Wales Fusilier and it was always his dream to have a War Memorial in Llanhilleth to commemorate the loss of local men during both World Wars. He wanted it within the grounds of the Institute and had a piece of land allocated. With the help of Pam Hopkins the committee contacted local businesses and councillors to raise the funds for construction.

The memorial was built in 1989 by apprentices from the Alan Davies Opportunity Centre in Tredegar. The dedication service was attended by members of the Llanhilleth community and local dignitaries. The first armistice was organised by Pam at short notice, from noon the previous day, but all went very well. This service and those for the next few years were carried out by Pastor Trevor Russell of Tillery Street Methodist. Father Robert Prescott took over after the Pastor’s death, and currently the Rev. Viv Nicholls annually presides. Her grandfather, Ted Nicholls, was involved with the ‘Stute for most of his life.

Over the years, the Last Post and Revelle have been played by John Harris and Councillor Steven Bard. The services are well attended, the congregation including ex-miners and their families. Refreshments are served in the ‘Stute and usually someone will start to sing, followed in turns by other local community members. Approximately two hundred people or more now attend this annual service which started from nothing more than one man’s wish.

This Plaque is donated by the local people and dedicated/

in the two World Wars./