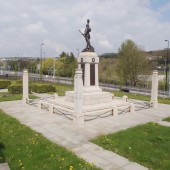 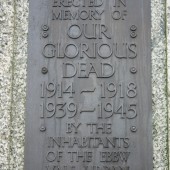 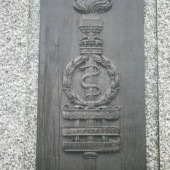 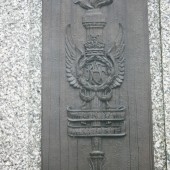 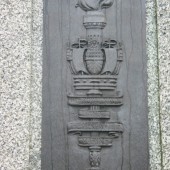 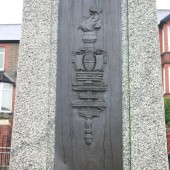 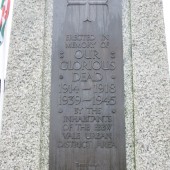 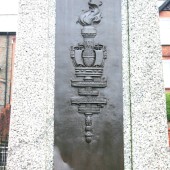 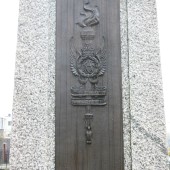 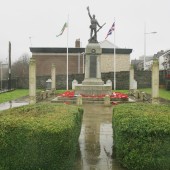 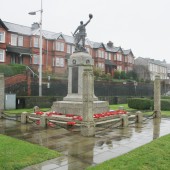 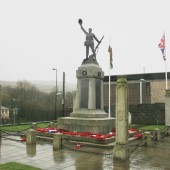 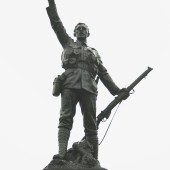 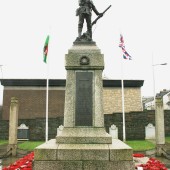 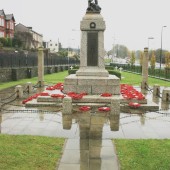 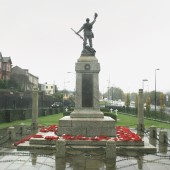 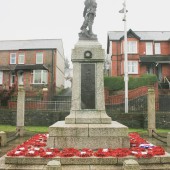 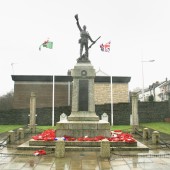 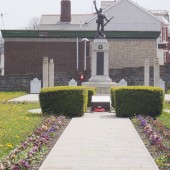 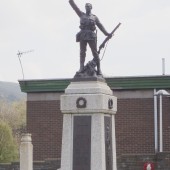 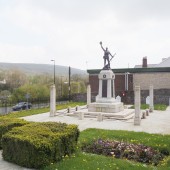 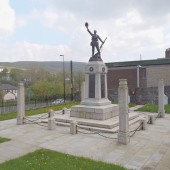 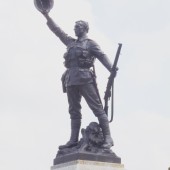 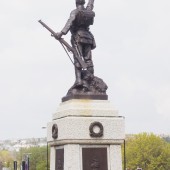 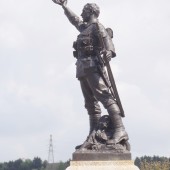 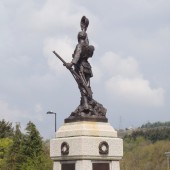 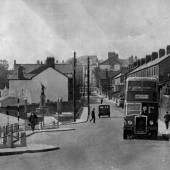 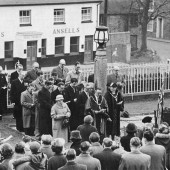 Previous Location: THE CROSSING, EBBW VALE.
Moved: EARLY 1950 TO ENABLE BUSES TO TURN AT THEIR TERMINUS. IT WAS ALSO THOUGHT THAT IT WOULD BE MORE DESIRABLE TO HAVE THE MEMORIAL IN A GARDEN ON LAND WHICH HAD RECENTLY BECOME AVAILABLE.

BY THE INHABITANTS OF THE EBBW VALE URBAN DISTRICT AREA/

THEIR NAMES LIVETH FOR EVERMORE

Physical Description:
SQUARE PEDESTAL WITH RELIEF PANELS SURMOUNTED BY SOLDIER RAISING HELMET ALOFT IN RIGHT HAND AND HOLDING RIFLE IN LEFT HAND ON BASE WITH DEBRIS OF WAR
RELIEF PANELS REPRESENT THE ARMY, NAVY, MERCHANT MARINE, AIR FORCE AND THE R.A.M.C. AND THE NURSING SERVICES

References:
Unveiling and Dedication of the War Memorial (September 24th 1924);
Information from the Buildings of Wales Office, London.

The idea of a permanent stone memorial to those who had fallen in the Great War rapidly spread throughout the country. Its purposes were to honour the fallen and to provide a permanent memorial of ‘the war to end all wars’.

At first there was great disappointment on the part of the organisers for the ‘mile of pennies’ raised but £34 and 10 shillings of the expected £250. Thus in 1922, there was still £3,000 needed.

By the 16th of February this had been reduced to £1,000. Prominent people within the area decided to organise a raffle to obtain the deficit. However, there was a storm of indignation from prominent churchgoers and chapelgoers, leading to the trial of such men as Bert Thomas, J.Price, T. Peck, C.Harding, S.D.Morris, J.P., J.Evans, C.G.Davies, E.Hoskins, and T.Sloper. It appeared that the opposition objected to the word gamble, despite the fact that their institutions raised money in a like manner. In a letter to the press (15.3.24) it was pointed out that the ministers of these chapels and churches would expect to attend the unveiling ceremony although the contribution from seven religious societies had only contributed £10. Apparently, the lottery tickets were sold for 1 shilling each with a car worth £200 as a prize. As explained at the trial, the lady on the ticket ‘was not up for raffle’. The secretary was ordered to pay £3 and 3 shillings towards the cost of the prosecution, while the offenders were dealt with under the Probation Act, where each of the summonses was dismissed.

In June 1924, the editor of the ‘Works Magazine’ was able to remark that the provision of a permanent Town Memorial had now taken definite form and hoped to be able to report that it would shortly be erected and unveiled. Later, he reported that the project was continuing and that the provisional date for the unveiling ceremony was 24th September 1924.

Work commenced on the cenotaph at the beginning of July. By this time nine chapels and churches had contributed £13 between them, while the Company had donated £100 and the Ebbw Vale Schools Football Association, £20 3shillings and 4 pence, the eighth highest donation.

A deputation was received by the council in September, consisting of Messrs. S.D.Morris, J.Mors and B. Thomas, inviting the council to accept the War Memorial and also stating that it would be unveiled on September the 24th. The invitations were readily accepted and a half holiday was granted to the council officials and workmen and also to the children so that they might have the opportunity of attending the ceremony.

On the 24th September, the cenotaph was unveiled by Sir Frederick Mills in the presence of 10,000 onlookers. At a meeting in October, the council agreed to hold a memorial service in Ebbw Vale on November the 9th and in Beaufort on November the 11th.

Later, the editor of the Works Magazine wrote: ‘In my opinion, two Minutes once a year is not enough. November the 11th each year should be set aside as a Day of Remembrance, and in this way the spirit of peace would be brought nearer. This is especially necessary as time goes on, because there is even now a huge population which knew nothing at all about the war, and in a short while there will be a generation which will regard the horrors almost as an unbelievable legend’.

In my youth, as a pupil of the County School, we were expected to doff our caps upon passing the Memorial. In fact a letter of the 1/11/24 deplored the growing hooliganism in the town as boys now passed the New Memorial without touching their caps.